My old friend pain (you weren't there man) 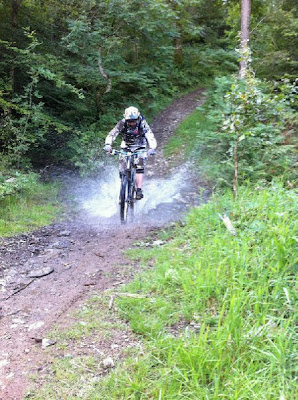 After very little sleep on Saturday night, I got up early Sunday to wait for Dave, breakfast consisted of black coffee, monster and jellied sweets. Dave arrived on time bikes and kit jammed into the car off we drove to Bury to pick up Michael.

Michael collected we sped off to Scotland for a secret meeting in Mabie, a long drive and we arrived at a petting farm!!! Good old sat-nav where would we be without it? (in the right place probably) a few J turns later we arrived at the bike park, which looked very posh with the stately home dominating the entrance.

A much needed coffee was glugged down, and a people started to arrive but no sign of the guest of honour, as we head back down to the car park Jason & Phil appeared, big grins included following god knows how many miles of riding to arrive at Mabie.

Surprise!!! Jason seemed chuffed that we had turned up on his Birthday holiday to go out and play, back to the car, kit on bikes out we were all ready to ride.

Jason, Phil, Lee, Dave, Michael and myself headed of to discover the frills (or Spills) of the North Shore trails and generally have a lads day out with bikes, ACE.

I could not find the energy to climb the hills and decided to blame it on the bike, but it was not the bike, I've got lazy over the past few months and it shows, we came to or first down hill section, at last i can have some fun, as i dropped in and hit the first jump the bike felt weird almost loose at the front even grip less, I put the whispers of doubt to the back of my mind and continued onwards, when we arrived at the north shore section we all happily made our way to the start and headed down the kerb size beam, yes we all nailed it (what happens on tour stays on tour)!

The riding had been tough, due to my lack of fitness and changes to my cock pit, it was about to get a whole lot tougher, as I took a corner I could see the slab drop down the trail, a few exposed rocks after it followed by normal muddy trail, easy drop off, roll out and power down, I cleared the drop but the dead tree stump to my right grabbed hold of my bars and sent me into the air, I hit the ground face first and continued forward on my chest and right shoulder, the bike the slammed into my right leg just above my ankle. Bollocks!! that's Scotland 2 - Fast Farrell 3.

A quick check that I was not dead, and quick look at the bike told me I was OK to carry on and meet up with the lads.

I felt tight for the rest of the ride, no strength at all in my legs and struggled to grip the bars, but I carried on slow at first, when you lose confidence in your own ability its always best to pace yourself.

When the ride was over, we shared tall tales and headed over to Jason's holiday home with the promise of home made soup, which was ace (thanks Debs & Jacqui ).

The drive home seemed to take forever, when I arrived home I flopped into bad and passed out.

I had an ace time despite the crash, thanks to all the lads and Happy birthday Jason the cake was lush.

I finally went to the hospital today to discover I have two cracked ribs on my right side, and that you get better drugs from the hospital than you do from a chemist :) will get the bike sorted out on Wednesday but for now its time for tramadol dreams.