The empire strikes back 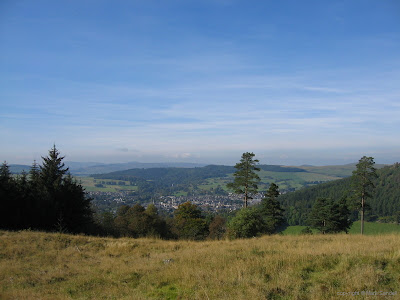 Scotland had been cruel on my last visit, the Peak ride made me suffer on a level I forgot existed!


It was time for some pay back, a van was hired and stuffed with bike and camping gear, we (me and Billy) headed off to the highlands in search of revenge and some fun.


We arrived in a piss wet Glentress late, decided to spend the night in a wigwam, a few beers where consumed and tales from history kept us awake until the we hours.

The morning arrived, and I was chewing at the bit, I had a point to prove to myself I needed to kill some trails and destroy the flea in my ear telling me I was to old for this shit!

The climb was carried out at a average pace, all shortcuts where employed to get to Spooky woods, the sun had arrived so had my nerves, doubt was pushed to one side as soon as I hit the first drop, bang I'm back baby!

Swooping down the trails, taking the berms as fast as my steed and skills would allow me, the joy started to spread, my body relaxed and it all started to flood back.

This is why I work in a boring job, so I can make my time filling and joy full, Billy was riding the trails nicely on his virgin ride, hitting the jumps, it all went a bit tats up when Billy got confused by the board walks, missing the board walk itself, only to pull up on his bike at the last min to avoid nose diving into a brook.

We finished the red route big grins intact, stuff high calorie pies down our pie holes (macaroni cheese pie, with toasted cheese lid) then jumped in the van to head off to Ae for our next stop.

Lost was not the word, when we finally pulled the van over to check the maps, we had travelled 25 miles in the wrong direction, we finally arrived at Ae car park at 22.15, nobody around, right we sleep in the van then, this was not the best nights sleep to be honest but it did keep us dry!

We awoke to the sound of workers arriving at the office not far from the bike/cafe shop, breakfast was consumed, and I showed Billy the DH route, Billy was not impressed, I on the other hand was having the time of my life, the Shredder was first, and no I did not attempt the road gap!

After a few runs, my arms and legs where starting to ache and time was getting away from us, we both decided to head home, Billy enjoyed his 1st MTB hol and I had removed all doubt from my mind, so take that Scotland.

I look forward to our next battle :)